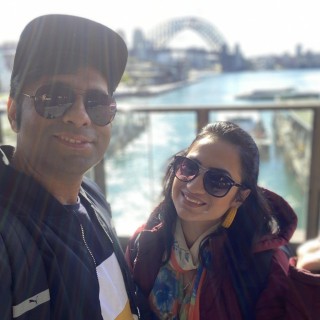 Hi! We're Sana and Ashar, and welcome to our Health+lifestyle blog. We're a couple from Australia who are hoping to inspire people to adopt and maintain a Healthy Lifestyle. HEALTHY BODY, HAPPY MIND!!

Last week was full of initiatives for us. Yes, you read it correctly, an initiative with ‘s’. Though we’d like to keep our other plans secret, for now, we promise they won’t remain suspense for much longer. We have heaps to share with you in our upcoming posts that we can’t wait to reveal!

As you’re aware that we started blogging a month ago, and undoubtedly we’re learning and flooding with new information every day! Read our experience blogging to find out more.

We’ve been keeping ourselves occupied while lockdown at least to prevent ourselves from oversleeping, fatigue, and anxiety. But above all, we’re shaping our long-pending projects. One of those was to publish our son’s playful activities on YouTube.

A couple of years back, our son, Ayaan, asked us: “Mom, Dad! It’s great to see Ryan every day, and I enjoy watching him so much! Please make my video today”. Ryan, a YouTube star kid who plays along with his family, play with the toys, and publishes a video each day on his channel ‘Ryan’s World’. He inspired Ayaan. That’s when we realized his feelings, and soon after that, we started filming his videos.

Though, it took a while to start the channel officially. Because he was anxious at the beginning, we felt that he was fearful because he was shy. He was afraid of being watched by many, other than just the immediate family. As parents, we could ultimately make sense of it, although he needed to confront his nervousness. Because he could be successful in life only if he masters to challenge his fear.

Soon we learned that despite getting nervous, Ayaan didn’t ask to turn off the camera (thank God!). Oh, boy! He enjoyed the filming experience! And what’s even more exciting? He felt confident and even more motivated for his next video shoot. Now, we publish his video every Monday on his channel ‘Ayaan’s Fun World.’ on YouTube. Watch his latest videos:

To make a long story short, we’re sharing our thoughts with you in this post because we’ve successfully overcome his fear of facing a camera. We’re hopeful, we’re happy, and we’re thrilled with experimenting. We’ve been able to manage our kids’ fears in various other ways that we’ll share with you sometime.

Let us know in the comments box, how do you manage your child’s fear of anything?

Did you notice a gradual shift in the behaviour of your child lately? Ever wondered the reason you’re being spoken about your kid’s behaviour in every parent-teacher meeting?

Do you know the difference between controlling your child and teaching them to learn self-discipline?

Educating our kids about self-discipline was discussed pretty often between both of us. It has been a focal point since the birth of our elder son, almost 7 years ago.

As working parents, both of us wanted our kids to learn self-discipline and anger management skills at an early age so that we don’t face much trouble later in life.

With our little knowledge and some exploration, our elder son learned to make healthy choices, self-discipline, patience, pressure management, self-care and manners.

In this blog post, we’re sharing 5 clever tips by which our elder son has become the star of his school and our family.

You’re a busy parent and certainly trying to balance between work & home, your health and between your kids. So, how would you make an effective home routine for your kids to follow each day?

Though we often didn’t reiterate the household rules since we had already set up a day and evening routine for our kids. Sticking a day to night schedule on the ‘fridge door’ has been incredibly effective in sticking us and our kids with the planned routine.

This exercise created a feeling of target-achievement, pressure-handling and responsibility in our elder son. Additionally, we noticed that he became happier, more creative and more talkative.

It’s not a rocket science to understand the fact that today’s generation is a digital zombie.

It’s healthy in a way if they’re learning about digital devices as a subject or they’re studying online (essential). Though we believe that going beyond those limitations could potentially turn around their behaviour, making it even harder to teach self-discipline.

We learned a few years ago that both our children show tantrums and disobeying tactics to get the devices back in their hands.

Since we’ve been setting and reiterating the limits on screen time almost every day, our children involve themselves in productive, creative and learning activities. Though it’s a gradual process and we do get hiccups, yet we’re consistently training.

3. Communicate the reason behind rules

We often seen parents setting the rules at home without adhering the cause of its establishment with their kids. We ask them a simple question of whether an adult would follow the rules regardless of the background?

We’ve been trained the same way, consequently, went through huge problems soon after our elder son turned into a toddler, as he won’t follow what both of us instructed him.

Not long after, we started stating the cause of the ruling, such as stating ‘You should complete your homework today because it’s due tomorrow and your teacher will be upset if you don’t complete one’ rather than saying ‘Do your homework because I’m telling you’.

It appeared much easier to understand the cause of our instruction for him.

Since your child is following a guideline set by you and understands the reason behind a limitation, you should move a step further and encourage them to repeat the same behaviour.

We believe that offering reward varies within age groups. For example, our toddler (younger son) sees the bottle of milk and a pack of chocolate as a reward while the junior gets encouraged if we offer him a 30 min session on his Xbox or take him to the Mcdonald’s.

Praising and rewarding our children makes them feel good about themselves and motivate them to repeat their action.

Whether you have a toddler or a teenager, your time and attention matters to them as it raises their confidence, self-esteem and communication skills.

Due to our overly burdened and occupied life, we never had a chance to peacefully sit with our elder son to speak about his day, school and his friends.

We’d think that he’s a shy individual though he was a chatterbox! And interestingly, we learned this trait a few days after his 3rd birthday since we took one week off from work and stayed at home.

Building and teaching self-discipline skills will take plenty of effort, commitment, consistency, attention and above all, patience. Ticking all the boxes to make them a responsible adult is not a piece of cake though consistency is the only key. In this blog post, we’ve revealed the ways that brought positivity in our son’s life and shaped him as a responsible person.

We hope it helped you in some way.

Can you tell us of a helpful tip to build a healthy parent-child bond? Let us know in the comments below.